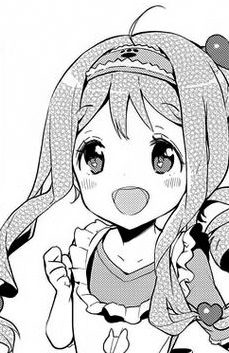 Kinue is a very short woman with brown eyes and she can be easily mistaken for a child due to her small body and appearance/style, even though she is 42 years old. Hayase has light brown hair that curls at the tips, which is tied in a ponytail, leaving some hair on each side that is adorned with matching heart hair clips. She wears a pink head band that has a dog foot print on. Although her wardrobe varies, she mainly wears the color sky blue, dresses and aprons. Hayase has pink crew-length socks with white frills and usually wears white slippers at home.

Kinue is a positive mother who is always doting on her children and she shows special attention to Masamune Makabe where she is always trying to do things that will make him happy, yet he often gets annoyed about. Kinue's mood swing when Masamune rejects her food. Since she already looks like a child, her personality often portrays child-like behavior as she shows mood swings whenever Masamune rejects her food offers, being happy to instantly saddenned that he won't eat her food. Whenever this happens, she feels that Masamune hates her, even though it is entirely false and that he just does not want to get fat.

Whenever Kinue shows up in the story, it usually involves food. Throughout the story, she is shown to be cooking foods with lots of calories and feeding it to Masamune Makabe, but he sometimes he rejects the food, which saddens Kinue. Near the end of the story, Kinue shows a different side of her when Masamune completely stops listening to her and Chinatsu Hayase as he leaves the house and does whatever he wants. Kinue becomes depressed to the point where she loses her usual self and hides in her blankets until Masamune will return back to their house.

Categories Community content is available under CC-BY-SA unless otherwise noted.

Community content is available under CC-BY-SA unless otherwise noted.
Advertisement